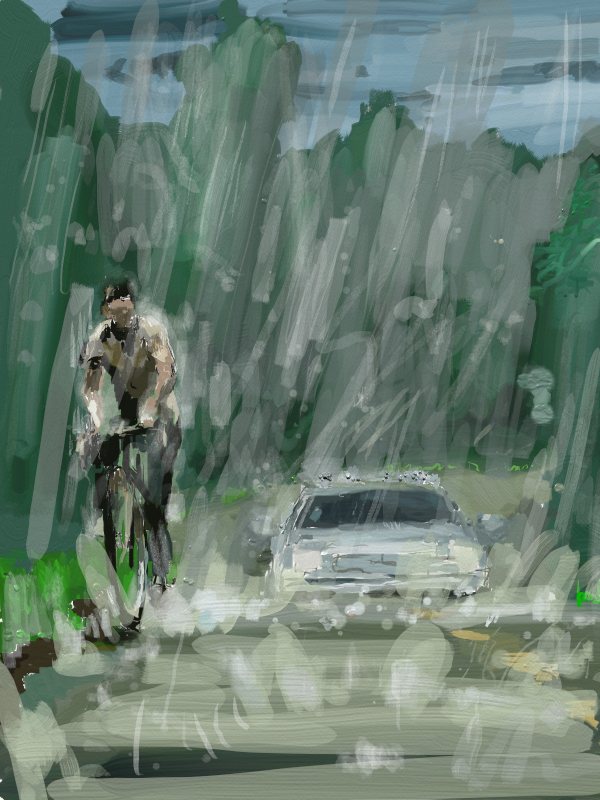 Winding across the open terrain of the island’s volcanic coast, a marine and sweeping, grass covered incline before the interior mountains, the bike came up the paved road from the little port town below the cliffs.  The weather was damp, humid and muggy and dark enough for road lamps or yard lamps or lights in the sparse buildings to be lit. Lightning made flash bowls of the sky with quick-to-follow smacks of thunder burning up the air in the near distance. The bike kept going through fine to thin rain. Water had been falling all day, either in bits and pieces or in a downpour. Where it normally passed in drifts across the sunny land, today it seemed like a low-level monsoon, a near constant.

The bike climbed past houses and farms with fields of lavender. This far up and with the rain abated, wide lowlands  between two shorelines were visible below, sweeping directly away under the grey cloud ceiling to the next group of distant, green-covered peaks, now faint behind the swirl of moisture laden air.

The bike reached the wooded foothills of the interior and started climbing quietly between low deciduous trees and thick, almost creeping green grass on either side of the road, the surface of which had changed from hard macadam to slightly rougher, packed-gravel pavement. There was hardly a sound in the trees, almost like a study or a library.

Waiting in the miles further up the road, scattered houses were hidden in the forest. Beyond that was the mountain top, often in clouds, followed by the drop back down to hidden valleys and canyons and more mountain peaks.

The ride was methodical and quiet, but on a bike ride as contemplative as this, the weather was sure to return in due course.

First it came in infrequent drops and later in splats. Like recent missives from space, more arrived in greater numbers, until they generated a noise all around, unmistakable on the damp road and the leaves and in the brush. Before long, a state of rain came in the forest. With only partial protection from trees and five miles more to go for the bike, it would also be unavoidable.

And to wait any longer in it would find the storm in-full.

On this kind of damp day, when a storm appeared, water came out of the air from everywhere, high up and down amid the trees. Big drops came out in volumes, making no deliberations, and created a crashing downpour. The bike’s tires marched along in a bouncing spray. Rain filled the road and filled the air.

And the bike moved on in a world of water.

In these conditions, the self-reliance of the bike was evident. It went one-to-one with the elements, without barriers, completely exposed and surrounded. Like stepping onto the wing of a moving airplane, it met the storm. But it didn’t rely on airplanes or special vehicles. This it could survive on the very road, completely by its own means.

The storm showed its character, still flashing the sky and sending out air-sizzling cracking noises. The bike made more miles, through turns and dips in the torrent and the wash and among the wild trees, standing in their natural element. And the rain held sway, as if in a time of siege.

But this could be waited out as well, and some minutes later, though the air and sky remained heavy and thunder still in action, the rain had once again returned to fine particulates and wet had already begun to evaporate from the pavement.

The bike cranked along the paved road, through more features in the landscape, trees and open areas, once again in still air, before reaching the fenced line of grassy hillside on the last stretch to the house in the trees. The house wasn’t at the foggy heights of the mountains, but it wasn’t far below, and fog lay in the near reaches.

The bike turned into the short curve of gravel drive, went up the greyed wooden steps and under the damp eaves of the deck roof and parked. The lights inside the house glowed in the darkened day and the rider went inside.